Prostate biopsy is a procedure in which small hollow needle-core samples are removed from a man's prostate gland to be examined for the presence of prostate cancer.

A biopsy procedure with a higher rate of cancer detection is template prostate mapping (TPM) or transperineal template-guided mapping biopsy (TTMB), whereby typically 50 to 60 samples are taken of the prostate through the outer skin between the rectum and scrotum, to thoroughly sample and map the entire prostate, through a template with holes every 5mm, usually under a general or spinal anaesthetic.

Antibiotics are usually prescribed to minimize the risk of infection. An enema may also be prescribed for the morning of the procedure. In the transrectal procedure, an ultrasound probe is inserted into the rectum to help guide the biopsy needles. A local anesthetic is then administered into the tissue around the prostate. A spring-loaded prostate tissue biopsy needle is then inserted into the prostate, making a clicking sound. If local anesthetic is satisfactory, discomfort is minimal. 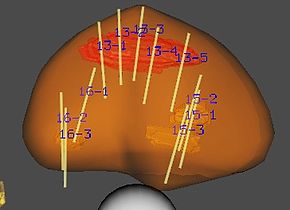 Since the mid-1980s, TRUS biopsy has been used to diagnose prostate cancer in essentially a blind fashion because prostate cancer cannot be seen on ultrasound due to poor soft tissue resolution. However, multi-parametric magnetic resonance imaging (mpMRI) has since about 2005 been used to better identify and characterize prostate cancer. A study correlating MRI and surgical pathology specimens demonstrated a sensitivity of 59% and specificity of 84% in identifying cancer when T2-weighted, dynamic contrast enhanced, and diffusion-weighted imaging were used together. Many prostate cancers missed by conventional biopsy are detectable by MRI-guided targeted biopsy. In fact, a side-by-side comparison of TRUS versus MRI-guided targeted biopsy that was conducted as a prospective, investigator-blinded study demonstrated that MRI-guided biopsy improved detection of significant prostate cancer by 17.7%, and decreased the diagnosis of insignificant or low-risk disease by 89.4%.Two methods of MRI-guided, or "targeted" prostate biopsy, are available: (1) direct "in-bore" biopsy within the MRI tube, and (2) fusion biopsy using a device that fuses stored MRI with real-time ultrasound (MRI-US). Visual or cognitive MRI-US fusion have been described.When MRI is used alone to guide prostate biopsy, it is done by an interventional radiologist. Correlation between biopsy and final pathology is improved between MRI-guided biopsy as compared to TRUS.In the fusion MRI-US prostate biopsy, a prostate MRI is performed before biopsy and then, at the time of biopsy, the MRI images are fused to the ultrasound images to guide the urologist to the suspicious targets. Fusion MRI-US biopsies can be achieved in an office setting with a variety of devices.MRI-guided prostate biopsy appears to be superior to standard TRUS-biopsy in prostate cancer detection. Several groups in the U.S., and Europe, have demonstrated that targeted biopsies obtained with fusion imaging are more likely to reveal cancer than blind systematic biopsies. In 2015, AdMeTech Foundation, American College of Radiology and European Society of Eurogenital Radiology developed Prostate Imaging Reporting and Data System (PI-RADS v2) for global standardization of image acquisition and interpretation, which similarly to BI-RADS standardization of breast imaging, is expected to improve patient selection for biopsies and precisely-targeted tissue sampling. PI-RADS v2 created standards for optimal mpMRI image reporting and graded the level of suspicion based on the score of one to five, with the goal to improve early detection (and exclusion) of clinically significant (or aggressive) prostate cancer. The higher suspicion on mpMRI and the higher PI-RADS v2 score, the greater the likelihood of aggressive prostate cancer on targeted biopsy. Considerable experience and training is required by the reader of prostate mpMRI studies.Up to 2013, indications for targeted biopsy have included mainly patients for whom traditional TRUS biopsies have been negative despite concern for rising PSA, as well as for patients enrolling in a program of active surveillance who may benefit from a confirmatory biopsy and/or the added confidence of more accurate non-invasive monitoring. Increasingly, men undergoing initial biopsy are requesting targeted biopsy, and thus, the use of pre-biopsy MRI is growing rapidly.Clinical trials of mp MRI and PI-RADS v2, including NIH-funded studies are underway to further clarify the benefits of targeted prostate biopsy.

Side effects of a TRUS or TPM biopsy include:

Side effects of a TRUS or TPM biopsy include:

Tissue samples can be stained for the presence of PSA and other tumor markers in order to determine the origin of malignant cells that have metastasized.

We would be happy to hear from you.